Asians in America, Cambodians in Lowell

By
Phil Hall
Published on
May 2, 2016
Advocacy & Civic Engagement 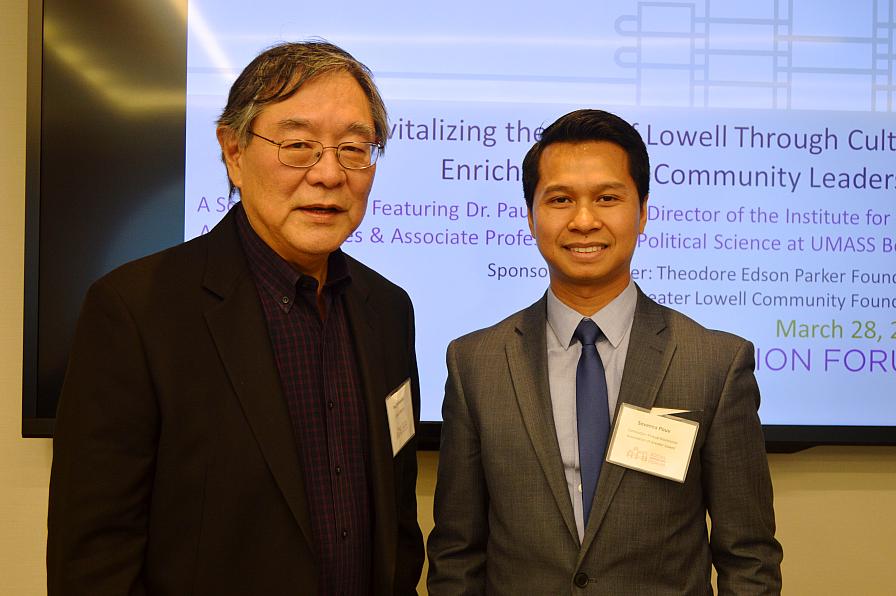 Dr. Paul Watanabe and Sovanna Pouv spoke to an audience of business leaders and philanthropists about Asian immigration to America and the Cambodian community in Lowell, MA.

During the month of March, the Social Innovation Forum hosted eight "Social Issue Talks" across the city. This year, we've invited guest bloggers from our community to offer their perspective on the events and reflect on what they learned about the social issues facing greater Boston. Guest blogger Phil Hall, Director of Grantmaking at GMA Foundations, offers his perspective on "Revitalizing the City of Lowell through Cultural Enrichment and Community Leadership," held on March 28 at Choate Investment Advisors.

When we think of America and American cities it is often in terms of reinvention, much of it fueled by economic change, but much also by the immigrant experience. For the nonprofit sector, reinvention is a way of life: most, if not all, organizations evolve over time to address new needs, opportunities, and funding realities.

The Social Innovation Forum (SIF) is perhaps best known for its work with startup organizations. Yet, as it is now doing with Cambodian Mutual Assistance Association (CMAA), it often works with more established organizations on the verge of redefining their position.

In March, SIF organized a Social Issue Talk featuring CMAA Executive Director Sovanna Pouv and Dr. Paul Watanabe, Director of the Institute for Asian American Studies and Associate Professor of the Political Science, College of Liberal Arts at UMASS Boston. Dr. Watanabe’s talk traced not so much a reinvention as an evolution, in the sense of the moral arc of the universe bending slowly toward justice. His talk presented a little appreciated but disturbing history of the “racialization” of Asians in the US:

With an estimated population of 17 million today, including 400,000 in Massachusetts, Asians are the fastest growing immigrant group in America. The Asian tag defies easy categorization, spanning 18 distinct groups and the entire spectrum of economic success. Those coming from the fallout of the Vietnam War have done less well, with Cambodian adults having the lowest education level of any US Asian group. This status is hardly surprising given the atrocity of the Khmer Rouge, which ranks among the worst in world history, and Cambodia’s agrarian background.

Cambodian refugees poured into Lowell in the 1980’s, a time of economic and cultural rebirth for the city, and their presence now approaches one-quarter of the city’s total population. That this transition was handled largely without incident is a credit to Lowell and its supportive networks. Over the years, the CMAA has created a culturally specific alternative health program in partnership with Lowell Community Health Center, sponsored various cultural events including the Southeast Asian Water Festival (annual attendance of 50,000), ownership and development of real estate, in addition to providing direct service to more than 10,000 children, youth, and adults.

Like other mutual assistance agencies, the CMAA was designed to assist in refugee resettlement, much of this funded by state and federal grants and contracts, with much of this early support now gone. Through his participation in the SIF Social Innovator Acclerator, CMAA Executive Director Sovanna Pouv is working to articulate a vision of CMAA’s future and a strategy for moving the organization forward. It is impossible to predict what form the new CMAA will take, but it is likely to have a more asset-based orientation, including emphasis on civic engagement as advocated by Dr. Watanabe in the form of citizenship, voter registration, and voter turnout—all of which, as recently documented by MassINC’s Commonwealth Magazine, are challenged by Lowell’s Plan E form of government. By being less dependent on public support, the new CMAA is also likely to be more flexible in its service to community members, and to grow its already fruitful partnerships with other nonprofits.

As a long-time funder of CMAA, we can begin to see things coming full circle: CMAA’s director Sovanna Pouv spent many years working for the United Teen Equality Center (UTEC) in Lowell (a 2008 Social Innovator), which has become a national model of startup success. As it happens, he was referred to his UTEC job through a job placement program operated out of CMAA. Pouv and his colleagues are part of a growing number of young professionals now giving back to the city that has become their home, in the process putting their own stamp on reinvention.

Phil Hall is the Director of Grantmaking at GMA Foundations, a philanthropic services agency that works with foundations and individual donors to establish and achieve their philanthropic goals. Phil currently serves as senior program staff for the Jessie B. Cox Charitable Trust, a New England funder, and the Theodore Edson Parker Foundation, which focuses its grantmaking on the city of Lowell, Massachusetts.