By
Melissa Duggan
Published on
December 20, 2022 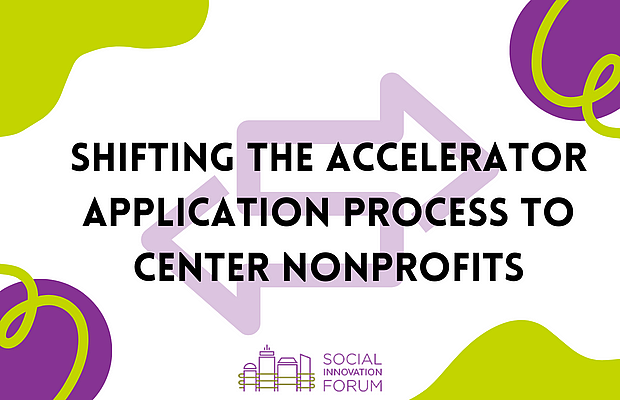 More than a year ago, the SIF team and some of our board members went through InclusionBoston, a series of conversations designed to help organizations create the necessary cultural shift that will support inclusive policies and practices. As part of that process, our team reflected on and identified existing barriers to shifting our culture and practices. Among the barriers to change was the cyclical nature of our flagship program – the Social Innovator Accelerator. With a new application cycle launching only weeks after the prior cohort presented at the Showcase, there was little opportunity for the team to reflect and make meaningful changes to our processes.

We did not have the luxury of taking a year off from programming, and we struggled to find ways to “pause.” “The pause” took on mythical status within our team. It became shorthand for the important, internal work we needed to do, work that was too important not to do, and, yet, we could not find a way to do it. I helped facilitate a team-wide exercise to identify items we could take off our plate. From a list of more than 50 activities, we identified precisely one. (We also identified approximately a dozen new things we could be doing if we only had the time.)

And yet, the question remained: how to change?

An internal working group was the first step, bringing together representation from our Accelerator program, our Funder Education program, and our Finance team. With four members, it was large enough to have multiple perspectives and small enough to move with some speed. Jenna Nackel, our Director of Network Engagement, volunteered to facilitate. Other members included Aditi Dholakia, Funder Education Manager; Sarah Dingee, Program Manager; and me.

The conundrum that we faced as a group was how to shift something as complex as our selection process, which is linked to our “Track Partnership” funding model for the Accelerator. We wanted to make progress, while acknowledging that this would likely take years to fully shift. In doing this work, we used Tema Okun’s Characteristics of White Supremacy Culture Framework regularly, looking at the ways white supremacy culture showed up in our Accelerator selection process and in our work together as a group. At the end of each meeting, we did a white supremacy culture audit (a tool we had learned from Trinity Boston Connects Organizational Equity Practice), where we identified aspects of white supremacy culture that showed up in ourselves and our colleagues in our meetings.

A Five-Year Vision for Change

We recognized that the path from where we were currently to where we wanted to go would take time. We defined our goal as follows: to make substantial (vs. incremental) change to some components of the Accelerator selection process for the FY24 cycle, while articulating a multi-year vision for change to work towards. We started by identifying what was and wasn’t working in our current selection process and used that to think about what a different selection process could look like. The group identified three main characteristics that would be central to a new selection process:

Next, Jenna facilitated a visioning exercise in which she invited the group to think five years ahead to what we’d want a selection process to be like. We dug into each of the three characteristics listed above to articulate what each of them would look like in practice and became increasingly clear on the direction in which we wanted to shift.

While we agreed on where we wanted to go, it was hard to figure out how to get there. SIF, with its focus on innovation and its core values of nimbleness and continuous learning, had not planned five years ahead for anything before. Our strategic plan was built with a three-year time horizon. Our organization has only been an independent nonprofit for six years. This was a new way of working for us.

We kept bumping into the enormity and complexity of what we were trying to change. There were so many interconnected pieces that we couldn’t identify a logical sequence of change. Even trying to separate out our focus area – the selection process – from the overall Accelerator program was hard. There was a real danger that our little working group would get stuck in “chicken and egg” type conversations. Overlaying this was the urgency our team felt to make big changes quickly – given that we believed some aspects of our current process were doing harm to applicants.

And then, in a conversation with another organization, we were introduced to the concept of “entry points to change.” In this approach, you focus on identifying possible places to start to change, understanding that change is an iterative process, and that, as much as we'd like to move quickly, we also need to build in time to try things out, learn what works, and continue moving towards our vision.

Instead of one linear path with sequential steps, our working group identified a series of entry points to change – things that we could try shifting in the near term to bring us closer to our longer-term vision. This helped free us from either/or thinking and allowed us to see that there was no “one right way” to change.

The entry points also allowed for more collaborative and constructive conversations with other staff and board members. We invited them to think with us about which entry points to try this year, generating more creative ideas than if we had simply presented them with a mapped-out plan for change. These conversations were rich and generative – allowing for ideas and suggestions to build on each other. Rather than reacting to a plan, we were co-creating one together. In the words of our Executive Director, we “focused on being creative and on what’s possible.”

We landed on three main changes to pursue for the FY24 program cycle. This work is underway now, through a broader working group of program, network engagement, development, and finance team members.

These are big, exciting, difficult shifts for SIF to make and we are moving through the work plans associated with each of them in the coming months. We have been heartened by the early positive responses from some of our key funding partners – individuals and institutions who see value in centering the needs of small nonprofit organizations and are willing to test this path with us.

No End to this Story Just Yet, But Stay Tuned…

I am writing this blog post when we are somewhere in the middle of this particular change process. As an organization, there is something vulnerable about sharing a work-in-progress so publicly. And yet, waiting until the end, until we’ve figured it all out and packaged it into a neat narrative doesn’t feel right. It deprives our stakeholders of an opportunity to learn alongside us, to contribute their perspectives and ideas, and to hold us accountable for making real change. We look forward to keeping you posted as this process evolves.